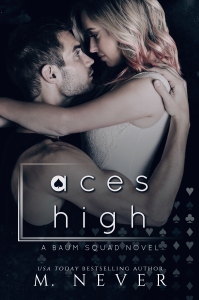 I have two weeks left to live.
Two weeks to come up with one hundred thousand dollars.
Two weeks to convince the woman I love she loves me too.
When The Bowman passed away — my dead father’s best friend and bookie — the payoff arrangement he made with my loan shark died with him.
Now, I have two weeks to cough up the money or else.
The only silver lining? The Bowman’s death brought Liv, his daughter, back into my life.
Ten years ago, all she wanted was my love. What she got was a broken heart instead. But time apart and grief do strange things to people, bringing them together in unexpected ways. Like drunk and horny and naked in your bed.
Now I’m in a race against time, fighting for the woman I want back, all while trying to figure out exactly how to stay alive.
Life, I tell ya. It can sure deal one hell of a mutherfkn’ hand.

The sunlight is trying to disintegrate me.

At least that’s how it feels.

My eyes are too sensitive to the light, and the brightness is enhancing the throb in my head.

When I shift on the mattress, I realize I have no idea where I am, but I do recognize the man next to me.

As I gaze at his blurry face, it all comes rushing back to me. The funeral, the alcohol, the drugs, the sex. Oh god, all the sex.

My stomach turns, and I’m not sure from what exactly — my whorish ways last night or the tequila churning in my intestines.

This is a fucking nightmare. Where in the hell is my head? All my good sense? I know. It flew right out the window after my father’s death. I’m a fucking mess. And he knew it. I stare at Damon sleeping soundlessly next to me, dead to the world. His dark hair is sticking up all over the place, his strong jaw is fixed, but the softness of his feathery eyelashes offsets the ruggedness of his beautiful face. If Damon has always been one thing, it’s beautiful, in a high-end model, drop-dead gorgeous type of way. The intimidatingly attractive type of way. And nothing has changed. He’s just gotten better with age, and when I saw him yesterday, all hell broke loose inside me, a clashing of conflict in my chest. So many warring emotions battled to take control.

My biggest pain in the ass.

I was messed up from the moment our eyes met.

And now here I am waking up next to the man I have tried to forget over the last ten years. Who’s sleeping peacefully, naked, with his limbs wrapped around me. Keeping me warm, and god, how do I even admit this, making me feel safe. We were friends once. And for a split second in time, almost more.

The thought of that memory is painful. Still fresh, even though it happened a lifetime ago.

Every moment I’m conscious and sober is painful.

Of everything I have endured in my life, losing my father has been the worst of the worst. The most fucking devastating. For as long as I can remember, I felt like I didn’t belong. Felt like I was an outsider everywhere except with him. He accepted me. He loved me. He supported me.

And now all of that is gone.

My eyes begin to water as the sobering truth of the last three days sets back in. I’m spiraling back into that dark place that’s empty and numb. That’s isolating.

It’s a hole I can’t climb out of, and spending the night with Damon only dug it deeper.

I have to get out of here. I have to escape. Looking at the clock on the nightstand, I realize I need to go. It’s eight thirty, and I have a meeting with my sisters and my father’s lawyer at nine.

“Shit.” I shimmy out of Damon’s death grip, careful not to wake him. That’s the last thing I need. A morning after confrontation. I just want to get the hell out of here and hope he forgets I even exist. I’m praying the abrupt disappearance will send him the right message: Don’t call me, I’ll call you.

I literally slide off the bed doing my best ninja impression. Naked, with my head splitting, I crawl around the room collecting my clothes. They are strewn everywhere. I survey the damage from last night as I dress. There’s two empty tequila bottles, a dozen and half lime rinds, and a knocked over shaker of salt. I take a pinch between my fingers and throw it over my shoulder. I don’t know who spilled it, but better safe than sorry. That’s all I need, my luck going down the toilet.

Once I’m dressed, I steal one last look at Damon still sleeping soundly. So many conflicting emotions. It’s a war zone inside my chest. We may not have seen each other in a decade, but that doesn’t matter one bit. Damon La Rue has been a hazard to my heart since I was seventeen years old. And now at twenty-seven, he’s still an emotional risk. Even if he is older, supposedly more mature, and an even better kisser now than he was back then. Like, how is that even possible?

Lots of practice, my subconscious sneers.

I say a silent goodbye to Damon and crawl out of the room with my shoes in my hands. Once in the hallway, I tiptoe down to the elevator, hitting the button like a crazy woman, so close to an escape I can taste it. When the doors ding open, I hop inside and inhale a sigh of relief. Success.

“Liv?” I pop open my eyes when I hear my name, and there is Damon standing in front of me with a pillow covering his private parts. Shit, shit, shit. The doors close, saving me, stealing my chance to respond.

One of Five ARC’s for Aces High
Direct Link: http://www.rafflecopter.com/rafl/display/b1257f8d520/