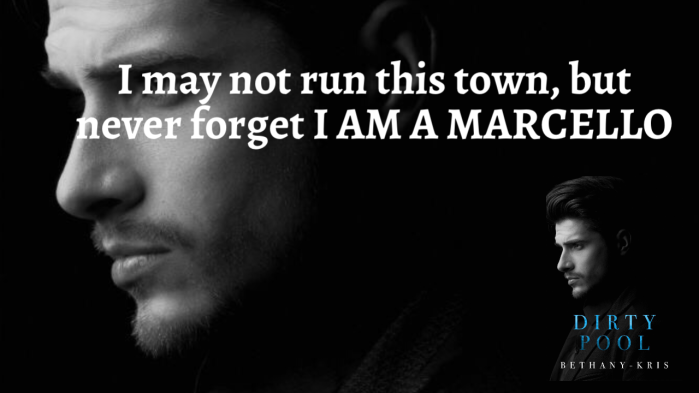 I MAY NOT RUN THIS TOWN, BUT NEVER FORGET I AM A MARCELLO – Mile High Kink Book Club

The Marcellos are a mafia powerhouse. It has it all, breathtaking romance and shocking suspense. Gabbie Casey, the daughter of the Irish mob and Michel the son of the Italian mob, creates the perfect forbidden romance. Loving each other proves to be a danger to everyone around them. Michel Marcello is the perfect guy!
The latest installment, Dirty Pool, set in Detroit, follows the life of Dante and Catrina’s son – Michel Marcello.
Michel is a student at the local university, who is not evil, but finds himself drifting back and forth into crime and trouble. Sure, he is exposed to the family business, he can become a made man but he choose the path of becoming a trauma surgeon – not bad considering the family can always use medical professionals. The explosive decisions he ultimately makes remind us he is a Marcello – and created a powerful romance drama I thoroughly loved until the end.
As a standalone, this is one of my favorites in the Marcello series. It has more romance elements between Gabbie and Marcel which I crave in mafia romances and rarely read. Some are more suspense focused on the crime and drama however Dirty Pool gives you just the right mix of everything – sex and violence. In closing, the story has a great energy and makes you turn the page. Its a mafia romance that simply shows things the way they often are within crime families. Dirty Pool is your mafia romance craving sastifed.
Mile High Kink Book Club highly recommends for your carryon and inflight entertainment. 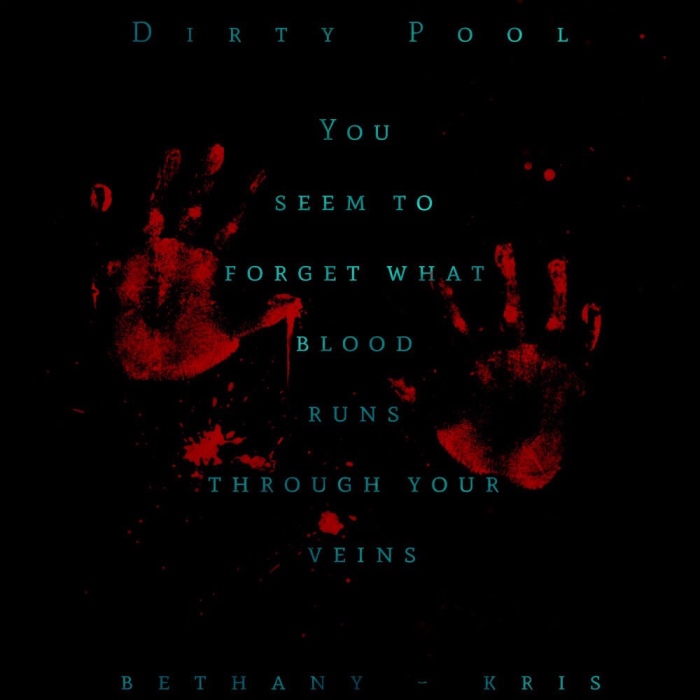 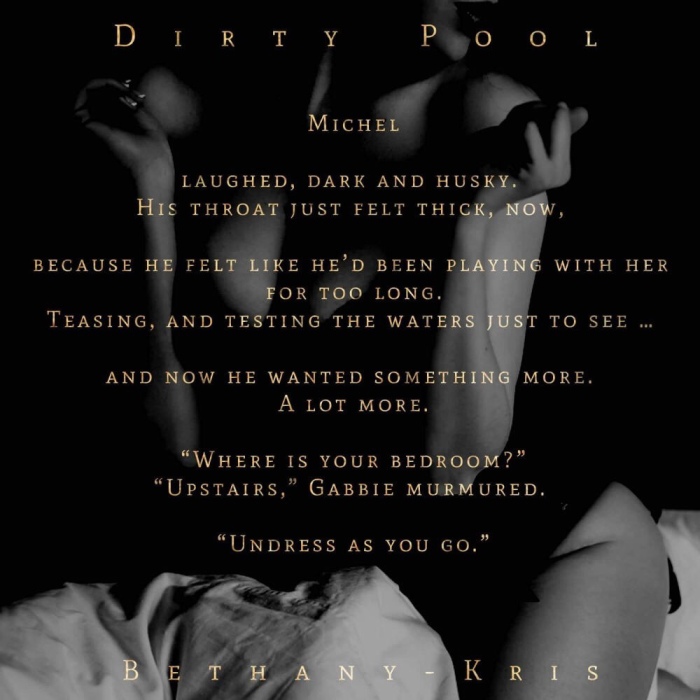 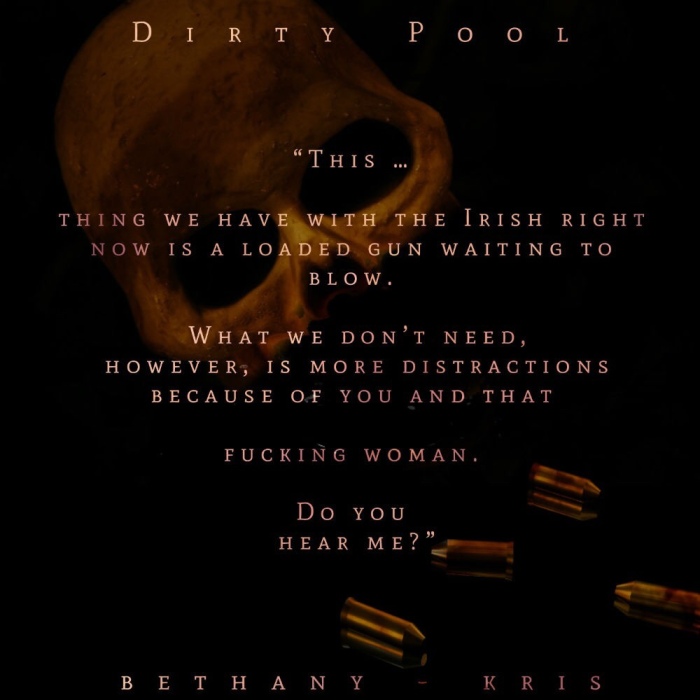 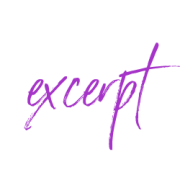 “What good would it do me to tell you to stay away from the lad, hmm?” her father demanded sharply. “I think I have said more than enough over the last several months since you’ve run around with the prick that it’s clear I don’t approve. But whatever it is, you’re determined to see it through, so I might as well let you get it out of your system now before reality comes to wake you up.”
“What does that even mean?”
Charles scrubbed a hand down his face. “You’ll learn in time. As I intend.”
“I—”
“And as for that Italian fecker,” her father continued, “he needs to pick a side, Gabbie. If he wants to entertain the Italians in the daytime, and then shift with my daughter in the shadows when no one is looking, then the man can’t be trusted, can he? A lad like that … his mind is too sharp, lass. They had to know what he was doing, and then he can decide what he really wants to do. I know where he comes from, and you have to watch him like it, too. I need him to know that I am aware of his choices, and he has others to consider now.”
“Are you giving him the ultimatum, then? Them, or us?”
Charles arched a brow. “It isn’t that complicated, sweetheart. You don’t have to understand when all I want you to do is follow along.”
Wasn’t it that complicated?
She thought so.
“Follow along with what?”
Charles waved a hand at her, and she knew what that meant without him telling her. A dismissal. He was done with their discussion, and she was quite aware how that worked with her father. Once he was done, he was finished. No amount of her prodding or pressing would get more from him.
“I have men to deal with,” he told her. “And you haven’t checked your sugars since this afternoon. Go do that now.”
“My sugars are fine!”
“Do it.”
She wasn’t a child.
She still felt like it sometimes.
Charles gestured at the group of lads that had attended the meeting, too, and were now waiting in the hallway just beyond Gabbie. Without waiting for her to really move out of their way, they pressed past her in the tight quarters, not even bothering to excuse themselves or pass her a second glance.
She wasn’t important.
Dismissed.
“Da—”
“Go, but not too far because I expect to speak with you again later,” her father ordered one last time. Then, to the men in the office, he added, “They never intended to settle, lads. That much is clear. We won’t act … yet. We’ll wait and see what they do first, aye, and then we’ll make the hard choices.”
Charles shut the door in Gabbie’s face, essentially leaving her alone in the hallway. It was amazing to her how she could feel so many things all at once. Anger warred with her disbelief and astonishment. Panic swelled in her heart, swirling with anxiety and sadness.
Did it really have to be like this?
What did that mean for her?
For Michel?
For them?
She didn’t know, and she didn’t like it.

To get what he wants, he’ll have to play a game of dirty pool.

Michel Marcello never wanted to be a mafioso like every other man in his family—he wanted to be more. That doesn’t mean he’s unfamiliar with the life, or that he can’t hold his own against other made men.

They forgot where he came from …

His chance encounter with the fiery and beautiful daughter of Detroit’s most notorious Irish mob boss stokes flames beyond the ones that ignite between Michel and Gabbie Casey. Rivals shouldn’t mix, but these opposites have never been more attracted, either.

The lines between family loyalty, their duties, and responsibility begin to blur.

But these two aren’t the only ones playing this game, and it just became far more dangerous to get out alive.

Bethany-Kris is a Canadian author, lover of much, and mother to four young sons, one cat, and two dogs. A small town in Eastern Canada where she was born and raised is where she has always called home. With her boys under her feet, snuggling cat, barking dogs, and a hubby calling over his shoulder, she is nearly always writing something … when she can find the time.

To keep up-to-date with new releases from Bethany-Kris, sign up to her New Release Newsletter here: http://eepurl.com/bf9lzD