Available wherever books are sold

THE BURN COOKBOOK is a hilarious, delicious must-have cookbook for chefs (and wannabes) everywhere! Jonathan Bennett (that’s right, Aaron Samuels himself) dishes out a tasty parody of Mean Girls, serving up behind-the-scenes stories from the movie alongside awesome recipes for treats that your favorite mean girls should be enjoying in Girl World. Like math, the language of food is the same in every country, and this cookbook is packed with amazing creations like Fetch-uccine Alfredo, You Go, Glenn (Hot) Cocoa, and Just Stab Caesar Salad. Written with the help of rock star chef Nikki Martin, Jonathan also shares his favorite recipes from his own childhood, like his mom’s famous stuffed shells, mandarin chicken salad, and other specialties that will round out any special event. Perfect for happy hour (don’t forget it’s from 4:00 to 6:00 PM), Wednesdays, or when sweatpants are the only thing that fits, THE BURN COOKBOOK is a must-own book for any food lover still trying making fetch happen. 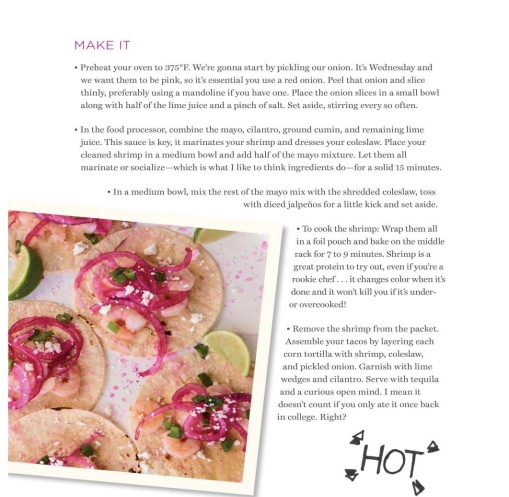 Get your Aaron Samuels, Carbs and Army of Skanks Fix Here!!!
The minute I open The Burn Cookbook was the minute I knew I had to watch Mean Girls again. The cookbook has it all – its delicious, colorful, and rich with flavor.
Jonathan Bennett , thats right- Aaron Samuels himself, served up a parody of dishes, behind the scenes “fetch” facts and his favorite recipe.

Take a look inside The Burn Cookbook:

The recipes are organized by courses – Friendly cocktails, appetizers, the main course, and dessert and many more. The recipes are well cross referenced.

For example: The recipe – She Asked Me How To Spell Orange Chicken appears in the index under: “chicken” and “orange chicken”

Each recipe is a parody tie-in with the movie. You will flip through this cookbook on a lazy Saturday morning while binge watching Mean Girls. Trust me – this will happen. So grab those Pink Post-It Notes! You will be highlighting many recipes. Yeah, ok you will participate in eating carbs too. But who doesn’t need a carb so you can obsess over losing those last three (3) lbs.

The Takeaway:
Dear Jonathan & Nikki
Your Cookbook is So Fetch!!

As a TV/Movie fiend, the recipes are awesome like the movie, but a lot more delicious and fulling.

A TIP before you dive in: Watch Mean Girls. You will laugh, reminisce at your favorite scenes and then you will be inspired to show a Plastic who is boss in the kitchen.

For example: 5 push-ups for each time you hear shut-up

So celebrate Mean Girls every day this year and grab your plastics for brunch at home #MeanGrills style.

I have a copy of The Burn Cookbook to give away to one lucky follower who leaves a blog comment.

Giveaway ends on November 8 2018
Giveaway is open to US residents only
Facebook is not affiliated with this book giveaway.
The book will be mailed directly from the publisher once I provide the winners name and mailing address.

ABOUT THE AUTHORS
Jonathan Bennett is an actor, television host, and food lover. He is best known for his role as Aaron Samuels in Mean Girls, as well as starring roles in Cheaper by the Dozen 2, Van Wilder: Freshman Year, MTV’s Awkward, and All My Children, among others. He competed on season nineteen of Dancing with the Stars and is currently the host of the New Year’s Eve celebration in Time Square and Cake Wars and Halloween Wars on Food Network.

Nikki Martin is a private chef to the stars, blogger, and TV personality. She has appeared on several Food Network shows, and was known as “The Grill Next Door” on Food Network Star season eight. She has also appeared on Bravo’s Going Off the Menu which featured The Roulette Society, her private dinner club.