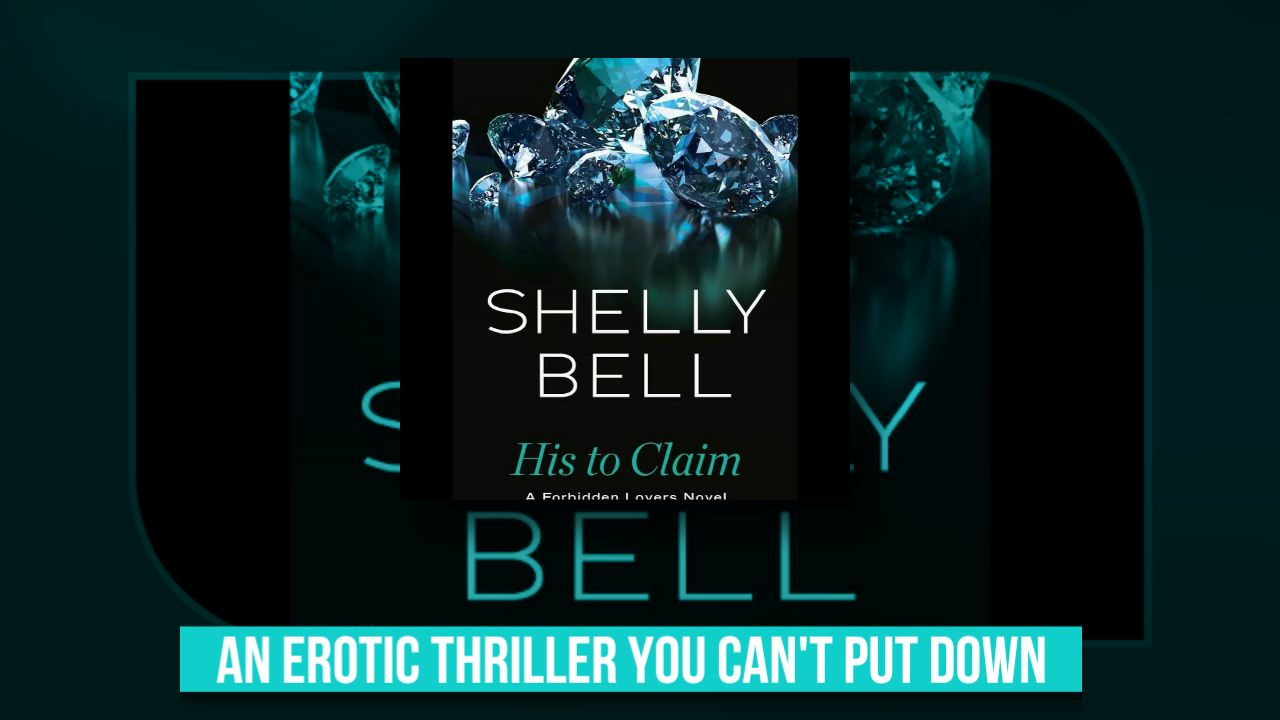 HIS TO CLAIM will demand your attention. Bell delivers a new erotic thriller you can’t put down. This is what romantic suspense should be. This story has it all: backdoor lovin’, spanking, and whole lotta dirty talk.  It is equal  parts hot and intriguing wrapped in a heart-twisting love story.  It doesn’t get any hotter or any better – in and out the playroom.
A year ago, Ryder McKay’s mysterious one night stand with Jane left him heartbroken and furious. Since then he’s tried to forget her and became obsessed trying to locate her until a photo of her working for his father’s business surfaces.
A computer genius, Ryder left his family business behind and started his own tech company to escape his father’s illegal activity. This sends him into a rage. Even though he intends to confront her about her theft, he still wants her and the passion between them is hotter than ever.
As their passion grow, so does the danger around them including high tech corporate espionage and murder. Now Ryder has to protect Jane from a possible danger that could come her way, even if the danger is his own father.
Nothing is what it seems. The plot is smart, clever and riveting. The conspiracy will shock and amaze you. I did not see it coming.  Even though it has arousing sexual scenes, the underlying suspense is well crafted and worthy of any suspense thriller fans.
Source: gifted copy from Netgalley for review purposes

“I had to constantly remind myself to breathe. Shelly Bell packs a powerful punch with her flawless writing and suspenseful, passionate love story.” — #1 New York Times bestselling author Jodi Ellen Malpas on At His Merc

Fate brought them together. Family could tear them apart.Ryder McKay may be a playboy, but he’s never been a fool. Not until he met the woman he simply knew as Jane. For one night, he dropped his guard, but in the morning she disappeared—along with a copy of his top secret technology.

When it ends up in the hands of his biggest enemy—his father—Ryder knows without a doubt he’s been betrayed. And when he finds Jane again, a year later, he can’t decide what’s worse—that her mother is marrying his brother, or that he still finds Jane irresistible, despite the fact that she’s a liar, a thief, and his father’s latest protégé.

Jane Cooper does have a secret, but it’s not the one Ryder thinks. As their rekindled passion changes into something deeper, they’ll have to work together to untangle a web of lies and corruption that will shatter everything they thought they knew about their pasts. Because Jane’s not the only one with a secret—and this secret is getting people killed.

He smiled, the skin crinkling around his eyes. Then his gaze dipped to her chest. “As much as I appreciate the peek-a-boo view of your nipples, your blouse is misbuttoned.”
Horrified, she slapped her arms over her chest. “What?” She looked down and confirmed he wasn’t joking. Somehow, she’d missed a button, allowing for a huge gap in the fabric, and since she barely filled a B-cup, she hadn’t bothered with a bra. How many others had she inadvertently flashed?
She closed her eyes and sighed. So much for making a good impression. Everyone was probably laughing behind her back. “Fuck me.”
Ryder grabbed her hand and pulled her from the pillar. “Usually I prefer a bit more banter, but I’m game.”
Her eyes flew open as she stumbled forward, slamming into a hard wall of muscle. His arm encircled her waist, helping her regain her balance. She clutched his sweater in her hands. God, he smelled good. “I’m sorry?”
He looked perplexed, one of his eyebrows shooting up while the other remained in place. “You asked me to fuck you.”
“I didn’t,” she said, her protest coming out much weaker than she’d intended.
Damn him. He confused her with that quick-witted tongue of his.
She clenched her thighs together, picturing him putting that tongue to better use. Crap, I shouldn’t be thinking that. What’s wrong with me? “That was me…I mean, I—”
He pressed a finger to her lips, silencing her stammering. “Tell me the truth. Do you or do you not want me to fuck you?”
Was that a trick question? She didn’t think there was a woman in the room who wouldn’t want Ryder in their bed. He removed his finger, giving her the chance to reply. “I…I don’t even know you.”
“What better way to get to know someone than by fucking them?”
The way he said fucking made her hot and needy. “Um…a conversation?”
He chuckled, the sound of it like a caress between her legs. “You want a conversation? How about this?” His arms tightened around her waist and he pulled her closer, letting her feel the full effect of his desire for her against her hip. “If I don’t get my mouth on your pussy within the next five minutes, I’m going to stand on top of the bar and tell everyone you crashed the conference without paying.”

Shelly Bell is the author of the popular Benediction and Forbidden Lovers series. Her book, Blue Blooded, received a Top Pick from Romantic Times Book Reviews and was nominated for an RT Award. At His Mercy, the first in her Forbidden Lovers series, has been nominated for an RT Award in Erotic Romance and received a starred review from Publisher’s Weekly.When she’s not working her day job, taking care of her family, or writing, you’ll find her reading the latest romance or thriller. Shelly is a member of Romance Writers of America and International Thriller Writers.
Twitter Facebook Web Goodreads
Amazon YouTube Pinterest  Instagram