Chapter 69: Read An Excerpt from WHITE KNIGHT by CD Reiss 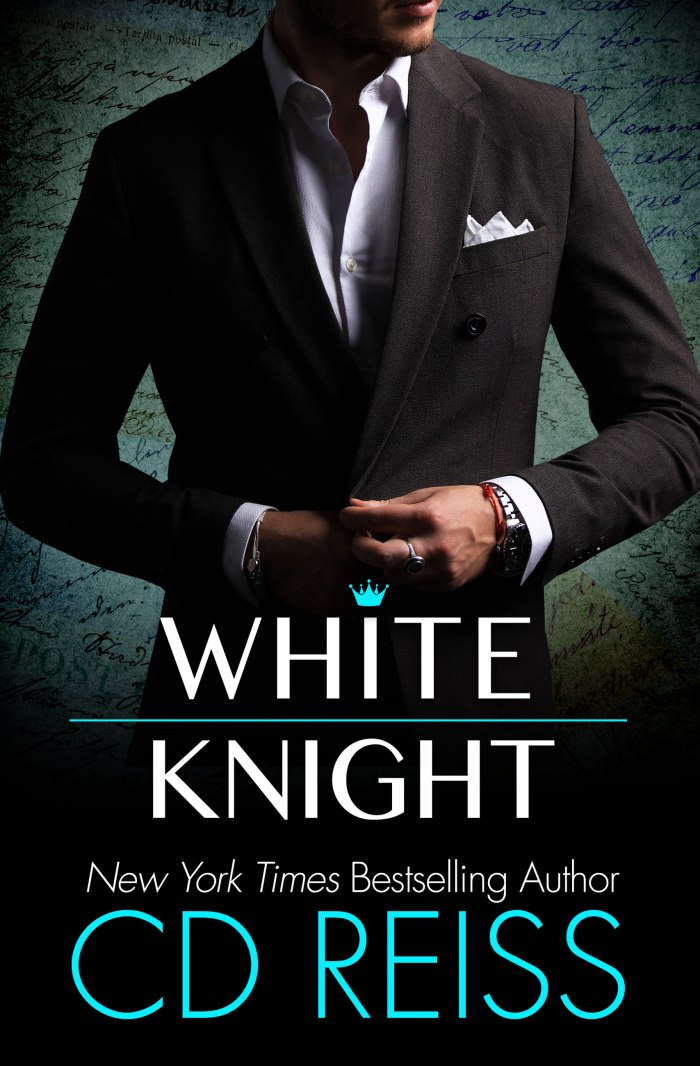 Leaning on the bleachers, Chris cracked peanuts between his teeth and spit the shells. I hadn’t seen him in days and it seemed like years. Every time I saw the kick of his hips and the way his lips stretched across his teeth when he smiled, it seemed like the first time.

School started the next day. We’d go back into our different worlds. Would we meet again? Would we see each other at all? We’d grappled with the question by avoiding it.

A waft of smoke from the grills came between us.

He pitched his peanut bag in the trash and washed it back with a bottle of off-brand cola. When he finished, he sucked in his bottom lip to catch an errant drop.

He tossed the bottle up. It spun in the air, and with a tap of his knuckle on its way down, he sent it into the trash.

I stepped toward him, and he stepped back. Not away. He stepped back toward something, flicking his finger that I should follow.

Easiest decision I’d ever made. It was barely even a decision.

I glanced around for Mom and Dad. They were in the gazebo with Badger, the new mayor, and his staff. Harper and the kids played with the puppies while Johnny and his wife watched. Lance jaunted around the perimeter, peeing on poles whenever he could, nipping back any sibling who got too big for their britches, ever the alpha.

I tilted directions slightly toward the bathrooms, then once past the bleachers, I saw Chris peeking from an alley between the hardware store and the library. I picked up my skirt and ran toward him, cutting the corner so hard I lost my balance. Out of nowhere, his hand was on my arm, keeping me from falling over.

Finger to lips, he led me to a black iron door. He clinked through his keys and opened it, stepping out of the way so I could pass through. We were in an office.

He closed the door with a loud clap, leaving the window as the only light.

I barely got out the S before his lips kissed his name away. He put his hands on my jaw, keeping it still so he could invade my mouth. It felt good to give it to him. My body lost all its strength, held up only by the electrical currents between us.

“Catherine,” he said in a breath, keeping his lips an inch from my face as he spoke.

“Back of the hardware store. I open on Thursdays.”

“Of not seeing you anymore.”

I clutched his shirt as if I’d be swept away without him. “I don’t fit in anywhere. Harper is so smart she tolerates me. The only time I feel right, like I’m part of something, like I belong, is when I’m with you.”

“One more year. Then you can go to college and I’ll come after. We’ll be so far away, we’ll forget our names. When people ask where we’re from, we won’t even know.”

I must have been shaking, because he put his arms around me so tightly it hurt. I loved the pain of his attention. It was the pain of safety, of care, of being broken just enough for release.

“Harder,” I said into his shoulder.

He squeezed me so tightly I could just barely breathe, and the tension rolled off me like water.

He let his arms go slack enough to look me in the face. “We’ll make it. Then I’ll follow you anywhere. I’ll be your puppy dog.”

“Don’t deny me. I’m yours.” He said the last word with a gusto I’d never associated with myself. As if life was something to grab with both hands and free like a bird that could carry us into the sky.

Together, we were freedom.

The bird launched from my chest and flew to my lips when we kissed again. Not a kiss of relief this time, but a kiss of passion. Ours was a kiss that began a string of thoughtless acts.

His hands slid down my body, grazing my breasts, landing at my waist. I felt the hardness under his jeans. I should have been scared, or freaked out, or ashamed, but I wasn’t. I was free.

He broke the kiss and stroked my bottom lip with his thumb. “Should we go back?”

“No.” I took his wrist and put his hand on the triangle below my belly.

He gasped and his lashes fluttered. Seeing that he liked it sent my body to the edge of common sense. This was crazy and I didn’t care. Being the good girl hurt, and this felt good.

“My parents have to stay at the barbecue,” I said. “That’s their job.”

He hesitated. Swallowed hard. Pinched a bit of my skirt fabric.

Catherine Barrington is a rich girl. Chris Cartwright is a poor boy.

On the trading floor he became the man he knew he could be. Now, it’s time to return.

She didn’t care about his money, but he didn’t believe her. Soon after he left, all the money was gone.

Her life is hell.

Money was never the barrier, until now.

White Knight will be exclusively on Amazon starting March 6th so grab it while you can on other retailers!!

Amazon US I Amazon Universal I iBooks I Nook I Kobo

CD Reiss is a New York Times bestseller. She still has to chop wood and carry water, which was buried in the fine print. Her lawyer is working it out with God but in the meantime, if you call and she doesn’t pick up she’s at the well hauling buckets.

Born in New York City, she moved to Hollywood, California to get her master’s degree in screenwriting from USC. In case you want to know, that went nowhere but it did give her a big enough ego to write novels.

She’s frequently referred to as the Shakespeare of Smut which is flattering but hasn’t ever gotten her out of chopping that cord of wood.

If you meet her in person, you should call her Christine.