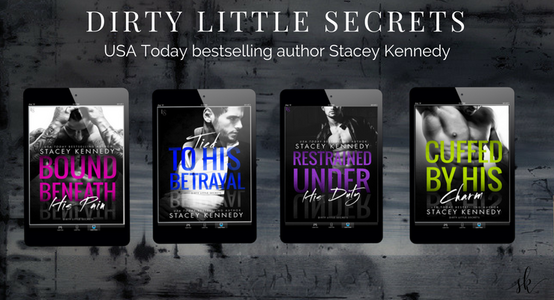 The multimillionaire owner of a chain of successful Irish pubs, Gabe O’Keefe loves being in the spotlight almost as much as he loves women. But when all his secrets are exposed in a shameless tabloid, his glistening reputation takes a hit. What hurts most is learning who sold him out: sweet and sensual McKenna Archer, his own employee. Gabe thought he could trust her. But now he’s got bigger problems than keeping his hands off McKenna.

After putting a difficult past behind her, McKenna would never betray Gabe. But she knows someone who would: her brother, a compulsive gambler who owes money all over town. To make things right, McKenna will have to set aside her feelings for her boss. Easier said than done. Gabe oozes pure temptation. But when they team up, McKenna sees that he isn’t the manwhore she always thought. He’s strong. He’s real. And the heat between them is the only thing that makes sense anymore.

Don’t miss any of Stacey Kennedy’s seductive Dirty Little Secrets novels:
BOUND BENEATH HIS PAIN | TIED TO HIS BETRAYAL | RESTRAINED UNDER HIS DUTY | CUFFED BY HIS CHARM 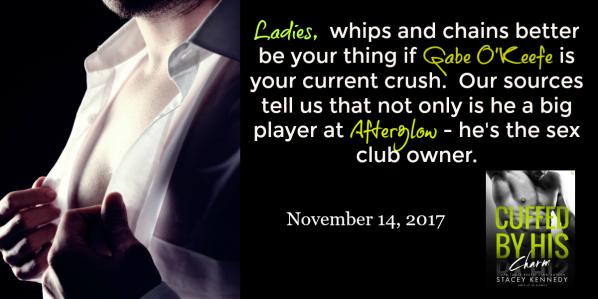 Warning: Do not read this as you are preparing to sleep. It’s a page turner in the wee hours of the morning. I fell in love with this story from the first page.

Rule #1: Don’t Date Employees | Yeah, right…Gabe O’Keefe is about to shatter that one. Gabe’s secret life has unravel and he blames one person: McKenna Archer. He is determined to make her pay for selling him out.
However he has been obsessed with her since she started working as a bartender in his bar. The more time he spends trying to find evidence on her, the harder it’s becoming to resist her sweet nature and his forbidden desire.

When McKenna tries to help her brother, her life become entwined with his secrets, lies and double dealings. Now, Gabe will break every rule to save McKenna from an enemy who may want her legs broken – or worse. Now both of their safety is being threatening.

This story will immediately whisked you away from reality while you enjoy the hotter than hot sex. It’s spicy and emotional with lust, betrayal and redemption. An easy and fun read you do not want to miss.