A Sheikh for Christmas
Leslie North
(All I Want for Christmas is…, #1)
Publication date: December 7th 2017
Genres: Adult, Contemporary, Romance

It may be cold outside, but the snow begins to melt when an unlikely couple comes together during the Holidays…

Christmas is right around the corner, but after creating a society scandal, New York heiress Melody Hascall-Ebons has nowhere to turn. Cut off by her family for running away with an actor—who turned out to be using her for publicity—Mel is penniless, homeless, and disgraced. There’s only one place to go, and that’s back to the fiancé she ditched. But instead of her ex, she finds his friend Daveed Rafik. The handsome military translator disarms Mel with his easy smile and surprising sympathy. But as she struggles to get her life on track, the last thing Mel needs is to fall into the strong arms of her ex-fiancé’s best friend.

Counter-terrorism expert Sheikh Daveed Rafik has spent his career dealing with delicate and dangerous situations, but none of them compares to Melody Hascall-Ebons. He’s supposed to be helping his friend Murphy find his missing sister, not consoling the spoiled rich girl who dumped their buddy Heath. But the more he learns about Melody, the more he likes. With her unexpected intelligence and distinctive beauty, Melody calls to him in powerful ways. But when the woman he is arranged to marry shows up, Daveed’s highly organized life suddenly gets very complicated.

The streets of New York are steeped in holiday cheer, but can Daveed and Melody thaw the ice around their hearts enough to make room for love?

Melody watched him walk away beneath her damp lashes. She’d never really paid much attention to Daveed before. He’d been one of Heath’s friends and always hanging around the periphery of their group, but had sort of kept to himself. Now, though, he’d come to her aid in her hour of need—or more like day of desperation—and a girl couldn’t ignore such chivalry.

As the silence between them grew more awkward by the second, she got up and wandered over to the table, which was covered by papers and post-it notes. Daveed didn’t look up at her at all, so she finally pulled out a chair and sat, forcing a tremulous smile. “What are you doing”

“Huh?” Daveed glanced up at her with a frown, as if just then remembering she was still there. “Oh, making lists. It’s how I keep track of everything I’ve got going on and my responsibilities.”

“Oh.” She picked up one yellow square and squinted at this illegible scrawl before she snatched it away from her.

“Please, don’t touch anything. These are all very important.”

“Right.” She’d never been big on lists or organization herself. Her mother had always had a social secretary to take care of most things for her and when that failed, then Melody preferred to “wing it.” For her life was all about spontaneity, but then again, given how this whole situation with Jefferson Hanks had turned out, maybe planning and consideration was the way to go. While Daveed said nothing more, scowling down at his notes again, she studied him more. Honestly, she really didn’t know the guy very well. From what Heath had told her, Daveed Rafik had served alongside him and their other friend, Murphy Coen, in the Middle East. Melody had always thought of Daveed as a sort of an Arabic James Bond type from the way Heath had bragged about the guy. He graduated Yale at the top of his class, spoke five languages fluently, and thwarted terrorists in a single bound, all without firing a single weapon.

Now, however, as he wrote furiously, his dark brows knit in concentration, she took her first real look at the guy. She’s noticed when he’d first answered the door that he was tall and well-muscled. As she sat beside him at the table, his dark brown hair curled above the collar of his white button-down shirt and reflected hints of gold beneath the lights. Yep. He was gorgeous, no doubt about it. If you went for the romance-novel cover sheikh type. Which she didn’t, at least not up to this point. 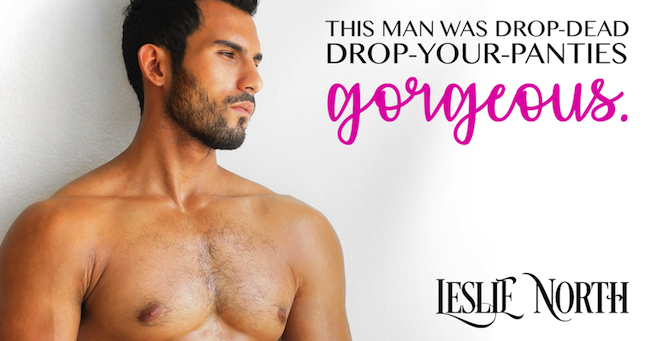 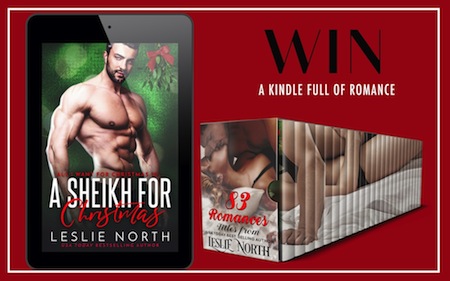 To celebrate my oh-so-hot “All I want for Christmas is…” series I’m doing an awesome giveaway. If you #preorder book one “A Sheikh for Christmas” you’ll enter a draw to #win a brand NEW #Kindle, with every single one of my books ever AND my yet-to-be-released ‘Sharif Sheikhs Series’!

That’s right! You’ll be the first person to read my latest series (three heart-stopping HOT Sheikh romances) a month before anyone else! All you have to do is pre-order “A Sheikh For Christmas” using the link below and forward your email receipt toleslie@leslienorthbooks.com!