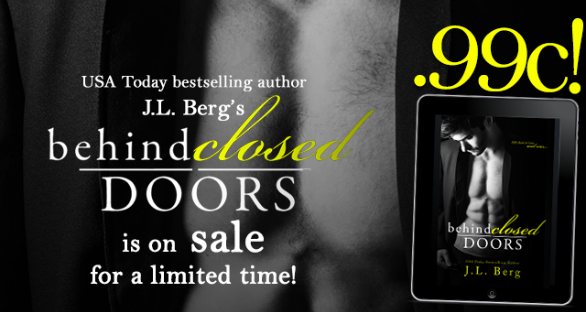 About BEHIND CLOSED DOORS

My name is Roman Cavenaugh and I’m kind of an asshole.

Running a company isn’t easy, especially when everyone expects you to fail, so being a jerk? It comes with the territory.

I don’t have time to mess around, and I sure as hell didn’t see her coming.

Cara Hamilton—she was supposed to be off limits…a temporary employee brought in during my assistant’s maternity leave.

But, in the blink of an eye, she became so much more.
An obsession I couldn’t shake.

So yeah, I may be an asshole, but now, I finally had a purpose, and soon, she would be mine.
All’s fair in love and war…

Get your hands on BEHIND CLOSED DOORS for .99c now:

“Can I ask you something?” she said, drawing my attention away from the monotony on my computer screen. I looked up to find her eyes dead set on mine. It was unnerving.

She usually tried to avoid direct eye contact with me. Maybe I intimidated her. Perhaps she found me attractive and the idea of lusting after her boss bothered her.

Believe me, it bothered me too.

In a very physical way.

“Go ahead,” I answered, unwilling to break the intimate connection she’d started.

“When you saw me… at the club that night,” she said, her eyes wavering just slightly. “What was it you saw in me? I mean, was it just the clothes?”

My eyebrows furrowed in confusion. Even though I’d said we’d never speak of what happened that drunken night two weeks ago, I saw something in her eyes that needed an answer.

That needed something more.

“Why are you asking?”

“It’s nothing, sorry. I’m being stupid,” she backpedaled, as she began fiddling with the hem of her skirt.

Looking back at our few interactions, I suddenly noticed the difference in how she’d acted today. Her normal never-ending stream of word vomit was there, but behind it, there was an internal struggle going on. The hemline wasn’t the first thing she’d fidgeted with. I’d watched as she’d pulled at the collar of her shirt and then, as if she’d realized what she had done was wrong, quickly lay it flat again.

“Does this have something to do with the way you’re dressed today?”

Pink tinged her cheeks once again.

I simply nodded, not trusting myself with words in that moment.

Because I’d more than noticed. It’d been damn hard not to think about anything but.

“A gift from my boyfriend,” she replied. “He said my old clothes didn’t fit in with our new life style. It was a very generous gift,” she added, never forgetting that politeness she’d no doubt been taught since birth.

“But?” I questioned, waiting for her to continue.

“But… I don’t feel like me anymore,” she finally admitted.

“And I’m guessing the night in the club was another gift of his as well?”

It was her turn to nod.

I could see the indecision and worry gnawing at her. Someone like her, sweet, honest and good… she was meant for better things than a life with a man who didn’t appreciate her.

Leaning forward, I made sure she saw the sincerity burning in my eyes as I spoke. “That night in the club, I’ll admit, I noticed the dress first.”

She opened her lips to speak but I held up my hand to stop her, wanting to make my point.

“And today, when you walked in, I couldn’t help but give a second… or third glance at the way that new skirt hugged your ass.”

Her eyes widened at my blatant honesty.

“So yes, the clothes may grab my attention for a moment or two, but the fact that I’m still interested, two weeks later? That’s you, Cara. That’s all you.”

I’d hit on an employee.

And there was no going back from that.

J.L. Berg is the USA Today bestselling author of the Ready Series, The Walls Duet, and the Lost & Found Duet. She is a California native living in the beautiful state of historic Virginia. Married to her high school sweetheart, they have two beautiful girls that drive them batty on a daily basis. When she’s not writing, you will find her with her nose stuck in a romance novel, in a yoga studio or devouring anything chocolate. J.L. Berg is represented by Jill Marsal of Marsal Lyon Literary Agency, LLC.