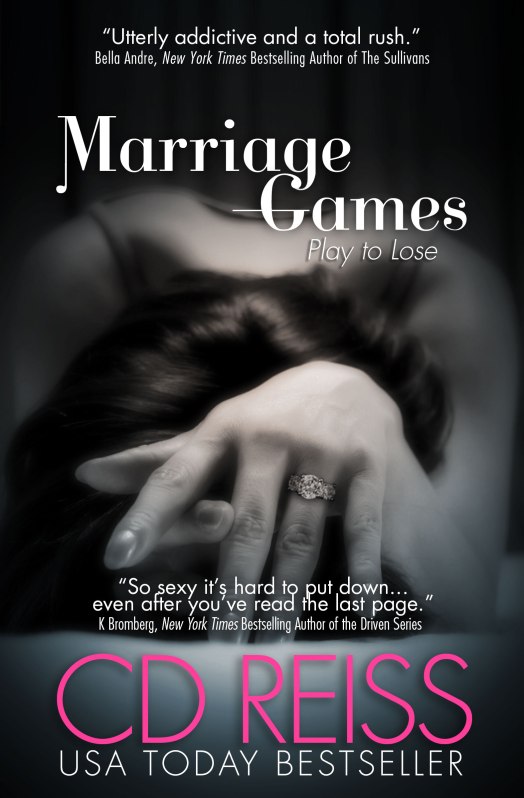 “Marriage Games is one of the most powerful novels I have ever read. CD Reiss gets into the soul of her hero and heroine and never lets go. A strong, clear picture of the psychological and emotional challenges of a D/s relationship, especially in a marriage. Why it works and why it might not. Can’t wait for the next one.” ―Desiree Holt, USA Today bestselling author

CAN 30 Days Change Heartache into Happily Ever After?

KNOCKED FOR SIX is the only way to describe Marriage Games.   CD Reiss created a typical, not so typical D/s romance – turned it inside out then flipped it on its head.

First, let’s talk about the writing.  I have a slew of adjectives for her writing:  excellent, outstanding and brilliant. They are all applicable.  My favorite part in Marriage Games is the scene Serena writing in the snow.  It was unfolding on the pages like a movie while listening to a voice over.  Exemplary writing like this is what keeps you coming back to CD Reiss’s work.  If I can shipwreck myself on a deserted island with all her current books, don’t send rescue until the next one is publish.

In Marriage Games, the range of emotions you will undergo will leave you hypnotized until your morning alarm goes off.  The most difficult part will be interpreting these emotions.  There will be moments you feel aroused and just as humiliated alongside Diana.

Right now, I am angry.  I feel both vindictive and revengeful.  Adam created so much damage.  He is selfish and all kinds of wrong.  I went from championing his cause to saying “F*ck you”.  He knew what would happen.

Diana was grabbed and pulled into the lifestyle kicking and screaming.  In the beginning, I had no objections with the coercion.  My mantra is all’s fair in love and war.   However, Adam took the priceless gift- used it, shattered it and threw it away like confetti.   He treated it like a return on the day after Christmas.

Don’t miss this powerful intervention.  Diana shredded her comfort zone and accepted the possibility that something good or better may exist on the other side of the unknown.   Would you face your fears or flee them?   The answers may not be as black and blue.  Until then, let’s plot ways to physical break Adam until January 2017!

That’s all Adam Steinbeck demands of his wife.

Thirty days in a remote cottage, doing everything he demands. After that, he’ll sign her divorce papers and give her complete ownership of their company.

That’s how long he has to rediscover the man he once was. The Dominant Master he hid when he fell in love with her five years ago.

She wants the business they built badly enough to go to the cottage for a month. Cut off ties to the world and do his bidding. She can submit to him with her body, but her heart will never yield.

She thinks this is his pathetic attempt to repair their marriage. 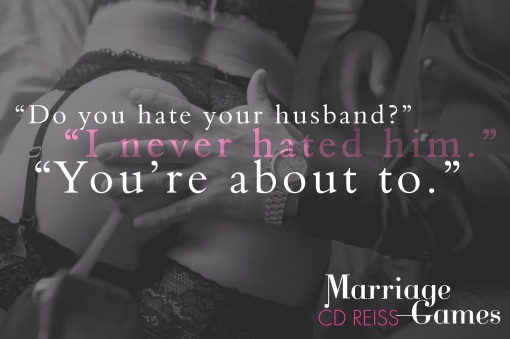 “Pull your skirt up.” I said it without acknowledging the possibility that she’d disobey. It felt good to use those words and that tone. To watch her eyes go to the floor.

“Trust me.” I said it so low she was just within range to hear it. “Five minutes. Then we don’t have to fight over the car.”

I stepped back and set my watch with a beep. It wasn’t about the car for her. The Jag was the least of her worries, but it was a tangible justification.

For the downcast eyes. For the way her breathing changed. Maybe every bone in her body was vanilla. Maybe not.

She laid her hands on her hips.

Pulled up her skirt.

The tops of her thighs came into view then met at the crotch. I was hard already and made no move to hide it. She noticed and stopped moving the skirt.

“Higher,” I said as if telling her how to center a picture over the couch. Higher was where it had to be. It wasn’t a request.

Up it went, revealing cotton underwear in a pink so pale they were almost white.

“Because I’m standing here with my skirt around my waist? Because you told me to? For a car, no less, which is creepy.”

She was so honest. I ached for her honesty.

“You’re not obeying me for an object. You’re obeying me so I do something. Take an action or don’t.”

“You think that’s not weird?”

“No, I don’t. And we have four minutes.” I stepped forward. Part of her discomfort was in the physical distance between us. I’d stepped away so she didn’t feel threatened, but my gaze was keeping her from relaxing. I kept my eyes on hers. I could smell her perfume and feel the shortness of her breath. “Are you turned on?”

Her initial shock and offense lasted only a second before she pressed her lips together and reached down, shoulders angling, hand thrusting as if checking to make sure her cunt was still there.

We have hundreds of bones in our bodies, and sometimes we won’t acknowledge the preferences of the ones that scare us.

I gripped the edge of the vanity and put my lips near her cheek, millimeters from touching her.

“You don’t love me anymore,” I whispered. “But I could always make you wet, and you always came for me. Like our Italy vacation. In Florence. Coming back from that club, in the little alley. Against the wall. I ripped through your underwear.”

Her breathing got shallow and fast.

“I fucked you in the dark, and when you came, you screamed my name so loud all the lights in the apartments went on.”

“That was good.” She turned her face toward mine.

When her lips nearly touched me, I pulled away just enough. “I said I wouldn’t touch you.”

“I changed my mind.”

I wasn’t fooled. Her arousal was talking. I owned her. She’d do whatever I told her. But I wanted something very simple. I wanted her pleasure. “Take the juice from your cunt and rub it on your clit. Make it wet.”

“Do it.” I felt her arm move against me. “Rub back and forth. Be consistent. One-two-one-two.”

When I felt that she had it, I stepped back. She stopped. Her knees were bent slightly and her fingers had taken her cunt from the side of the crotch, not the waistband. She never ceased to surprise me.

“Is this your way of getting back at me?”

Her body must have been able to override her mind, because she moved her finger again, closing her eyes. Her cheeks reddened and her knees bent more deeply.

“In Florence. An hour after we got to the hotel. I came so deep in you that night. I fucked you from behind with your leg up on the dresser. I wanted to thrust my whole body inside you. I loved you that much. And I gave up who I was. Last night, at the club, I remembered what I was. I was a man who was obeyed. I dominated women, and they submitted to me. The result was what you’re about to feel. Complete pleasure.”

She let out a long, low groan, leaning on the vanity, twisting. I could have fucked her right then. I could have bent her over the counter and pounded her. But that wasn’t the point. No. Watching her hand move under her clothes because I commanded it. That was the point.

An uh escaped her throat. Years of marriage had taught me that meant she was about to come.

“Thank you,” I said. “We’re done. I’ll send you the title to the car. You might want to pull your skirt down, since I can’t lock the door from the outside.”

It was hard to walk away from her panting, bent frame without tasting her cunt or even seeing more of her reaction, but I turned the corner, unlocked the door, and left the bathroom. 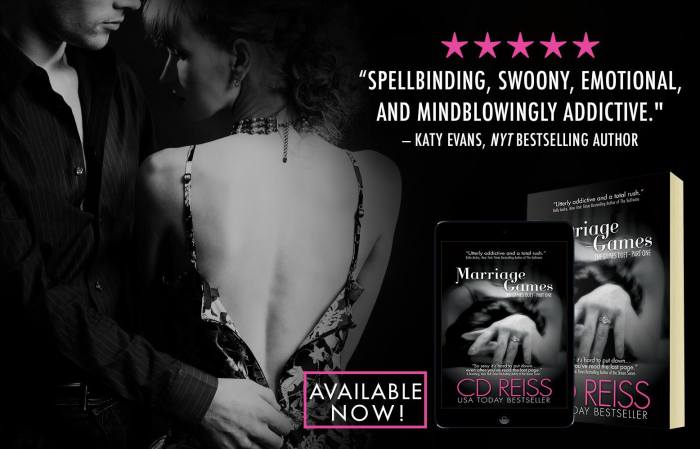 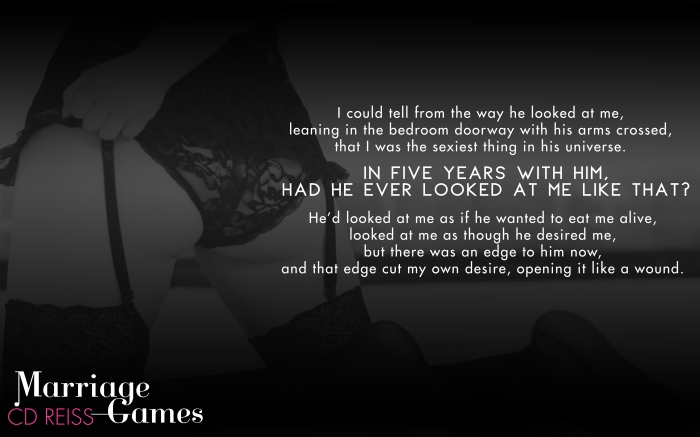 CD Reiss is a USA Today and Amazon bestseller. She still has to chop wood and carry water, which was buried in the fine print. Her lawyer is working it out with God but in the meantime, if you call and she doesn’t pick up, she’s at the well, hauling buckets.

Born in New York City, she moved to Hollywood, California to get her master’s degree in screenwriting from USC. In case you want to know, that went nowhere, but it did give her a big enough ego to write novels.

Critics have dubbed the books “poetic,” “literary,” and “hauntingly atmospheric,” which is flattering enough for her to put it in a bio, but embarrassing enough for her not to tell her husband, or he might think she’s some sort of braggart who’s too good to chop a cord of wood.

If you meet her in person, you should call her Christine.

𝗖𝗢𝗠𝗜𝗡𝗚 𝗦𝗢𝗢𝗡 𝗙𝗥𝗢𝗠 Willa Watkins ➜
What to do when someone falls to their death at a posh hotel in Boston? Well, that’s the plot to today’s new release.
My April TBR - Excerpted from Ruthless Women, by Melanie Blake. Head Of Zeus Publishing, 2021. Reprinted with permission.
#currentread 📚 This Carolina girl is obsessed with THE LAST CAROLINA SISTER - available now!!!
Between the pages excerpt of my #currentread :
Free Book 🚨 The weather is warming up - why not read a hot new book !?? One click #TheKingMaker