Today we have the new release for Tell Me A Secret by Tamara Lush! Check it out and grab your copy of this sexy new novella today!!

A flirtatious reading of erotica blossoms into something deep and tender in the steamy Florida heat…Emma and Caleb’s journey continues in Tell Me a Secret. Don’t miss this explosive new episode of The Story Series!

He promised her forever, but now he’s gone … leaving her searching for the truth. ***

A pregnant wife struggles to remain true to her marriage after her husband’s mysterious disappearance. But as she must bear their child and go on without him, she wonders how long she can wait. Caleb is gone. Somehow he disappeared from the new business complex in Brazil, leaving no trace. With all the millions at his family’s command, neither company security, the police or private detectives can find him. Was he kidnapped or murdered … or did he walk away of his own free will? Emma nearly goes mad with grief, only the necessity to keep her baby safe and well helping her hang on. Her sleep is plagued with erotic dreams and nightmares, all starring Caleb. Her days are spent wondering and waiting for any scrap of news. Adding to her pain, the Brazilian police probe for illicit secrets that may have drawn Caleb away. Only his siblings and her best friend help her hang on. But when Emma must bear Caleb’s daughter without him at her side, she realizes Caleb may never come home. Can she make a life for herself and her daughter with his family, even with the huge hole in their midst? And what happens when his younger brother Colin ignites conflict that she alone can resolve? Secrets may have taken Caleb from Emma … but what about her own secrets?

I just finished Tell Me A Secret. Wow, a lot has happened and a sudden twist has emerged. In Tell Me A Lie, we are left with a missing person and a mystery.   Caleb has gone missing and Emma’s storybook romance is left in shatters along with a pregnancy alone.   Why her friends and family are slowing dealing with the reality of Caleb possible gone forever, Emma is determined to remain positive and prepared for the day when he finds his way back to her.  However, it’s been months and no word.

Tell Me A Secret is really the episode to prepare for the finale. While it didn’t explain any secrets about Caleb, we are really left wondering where the author is trying to take the story.   Because I am so invested in this hot but yet sweet romance, it really didn’t take very long to devour the fourth (4th) episode this am.  It’s a very quick sexy read however with no explainations.   Hopefully, we have some answers when Tell Me A Truth is released. 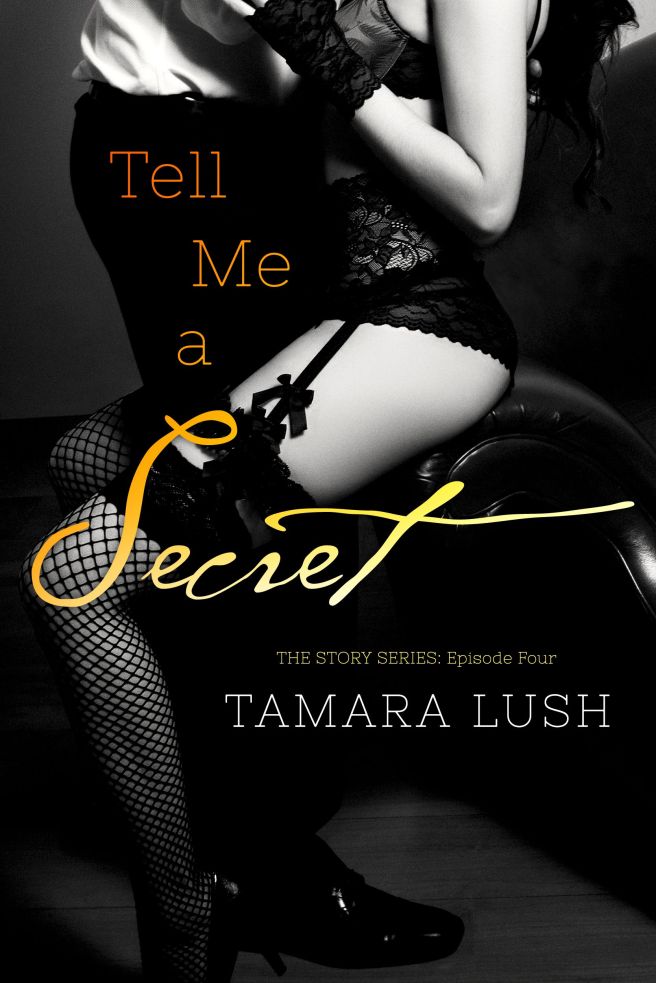 TELL ME A SECRET

With a river of sweat between my breasts and a pool of moisture along my hairline, I sat up, gasping and shaking. The white, cotton sheets were heavy and tangled around my legs. It was morning. I was alone in my beautiful Art Deco bedroom and Florida’s sherbet-colored sunrise poured past the half-open curtain. My skin was aflame, as if on the verge of sunburn.
I was eight and a half months pregnant and dreaming of a ménage with my husband—who had been missing for weeks—and his brother. To say I was going insane was an understatement.
I sobbed, hard, my chest heaving. At one point, I almost retched, I was crying with such force. Sitting up, I gulped in a few breaths, trying to calm myself. It was nothing but a crazy, hormone-and-stress-fueled dream. One of many tormenting nightmares I’d had in recent weeks, ever since I’d been put on bed rest due to precariously high blood pressure.
After a minute or two, I stopped wailing. A thick fog had settled into my brain, and I shook my head, trying to chase away both the haze and the memory of the intensity of the subconscious sex scene. The recurring dreams—or were they erotic nightmares?—always made me simultaneously wet, needy, and ashamed.
Also profoundly, horribly sad.
I was grieving, but still hopeful, that Caleb would be found. But each day without news brought only more anguish and more ambiguity. So I was constantly in a state of suspended animation, never quite sure what was real. Was Caleb alive? Hurt? Did he miss me or had he just vanished because he hadn’t wanted to be a father? We’d hired private investigators, his parents were back and forth to Brazil helping with the search, and I was not only on a first-name basis with the detectives of the Sao Paulo police force, I’d sent one of their kids a birthday present the previous week.
And still, nothing. No clues, no leads, no Caleb.

Catch Up on the Series:

TELL ME A DESIRE: (Free on Kindle Unlimited, 0.99 cents to buy for a limited time):

During the day, Tamara Lush writes news as a journalist with The Associated Press. At night, she writes fictional romance tales about complicated, sexy men and the women who love them.

TELL ME A STORY is Tamara’s first novella. It’s the first episode of The Story Series, a five-novella serial about a bookstore owner who reads erotica to a billionaire during a literary event in Florida.

When Tamara isn’t reporting, writing or reading, she’s doing yoga, cooking for her Italian husband or chasing her dogs on a beach on Florida’s Gulf Coast. She loves connecting with people on social media.