If you love the MMA  romances of Vi Kreeland and Kendall Ryan, Sidney Halston’s Worth the Fight series will knock your socks off! In Fighting Dirty, a geek-chic cage fighter proves that appearances can be  deceiving . . . and oh-so-tempting. 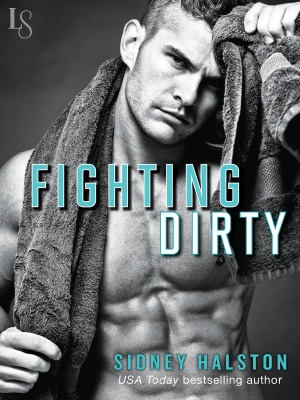 With his preppy clothes and horn-rimmed glasses, Enzo Silva is the last dude anyone expects to find in a mixed martial arts gym. A wealthy Brazilian banker who never had to fight for anything, Enzo’s stuck in the amateur circuit—but he burns to make the pros. Maybe that explains the heat he feels whenever he’s around Jamie Lynn Calhoun. The pint-size, magenta-haired bartender with the Texas drawl is everything he’s not . . . and everything he craves.
Tough as nails and independent to a fault, Jamie Lynn—JL to her friends—works hard to pay her bills and keep life simple. Enzo is doing his best to complicate that. Even though she likes to bust his balls, he’s got some kind of a nerdy-hot vibe that makes JL wonder if she might finally be able to let her guard down. It might do the boy some good to spend some time in her world, where blood, sweat, and victory are as sweet as the first taste of real love.

“What made you change your mind about going out with me?” he asked as they crossed the parking lot. “Not that I’m complaining. But you’ve been saying no for almost a year.”
“Truth?”
“Always.”
“You always seem so predictable, but you doing this . . .” She shook her head. “I guess it made me see you in a different light.”
He held her car door open for her as she tucked the canvas facedown in the backseat and then got in the car. “I’m glad it took me completely humiliating myself to get you to go out with me. Maybe I won’t kill your brother for this ridiculous bet, after all,” he said. “I’ll make reservations at the Tackle Box and pick you up at eight tomorrow.” When she looked at him for a moment too long, he said, “You don’t like the Tackle Box?”
“Do you work tomorrow?” she asked as she got back out of the car.
“Yes.”
“That was a dumb question. You’re always working. Let me rephrase the question. Can you take the day off tomorrow?”
Enzo quickly thought about all the teleconferences he had scheduled and all the reports he had to do. “I can.”
“Okay, so I’ll pick you up at eight.”
“Uh . . . I don’t understand.”
“Eight in the morning,” she clarified. “I asked you out, so I pick. That’s the deal, okay? It’s my treat. I pick where we go and what we do.”
“I don’t think—”
“You hate giving up control, don’t you?” she asked wryly, already knowing the answer. “Don’t worry so much. Just be ready. It’ll be fun—spontaneous. You’ll like it. I promise.”
He let out a breath. “Fun and spontaneous isn’t something I’m very comfortable with,” he admitted. But then he decided, What the hell? He’d already survived taking the biggest leap of faith of his life by moving from Brazil to Florida, something that was so completely out of character his parents thought he was still mourning the end of his marriage. So, going on a date with a beautiful woman and letting her take the lead . . . what could possibly go wrong?
“Okay, fine. I’ll text you my address,” he said as he leaned in and kissed her cheek. She folded herself into her crappy fifteen-year-old Honda Civic, which was mostly red, except for some patches where the paint had chipped off. The bumper was held together with a hot-pink bungee cord, and there were bumper stickers plastered everywhere. He couldn’t picture her with any other car but this one; somehow it suited her perfectly. But she was absolutely out of her mind if she thought he’d be going anywhere with her in that clunker tomorrow.

Sidney Halston lives her life by one simple rule: “Just do it.” And that’s exactly what she did. At the age of thirty, having never written anything other than a legal brief, she picked up a pen for the first time to pursue her dream of becoming an author. That first stroke sealed the deal, and she fell in love with writing. Halston lives in South Florida with her husband and children.
Facebook | Twitter | Website | GoodReads

Tags: Worth the Fight series