Warning: “There is sex, more sex and definitely some blasphemy”

Wow, just WOW!  OMG! If only they knew what I was reading on my Kindle. I knew from the blurb, PRIEST was going to be a good read.  It takes “forbidden” “holy crap” and “O, God’ to another level.  It doesn’t hurt that the book comes with a warning!  Oh yeah, sign me up for the fall down the rabbit’s hole.

We are introduced to Father Bell’s POV and his confession in the beginning.   In his confession Father Bell states “I broke my vow of celibacy on the altar of my own church” That has to be a metaphor right?  Ok, we will come back to that…..maybe?!

He meets Poppy Danforth when she walks into confessional.  Immediately, her voice makes him feel like a man.  After meeting her, Father Bell takes us through a journey of curiosity, self-control, guilt, desire, regret, penitence, shame, love and acceptance. The story, which may be considered as taboo, is very real and true to the hero’s struggle.

The PRIEST, clearly broke a lot of commandments. In his struggle with Poppy, Tyler becomes so enamored he feels he would kill (another metaphor?) if it means he could have her.  Instead of offering herself to him freely, she prefers Tyler to ‘steal’ her kiss and her submission. He displays moments of jealousy regarding Poppy’s life before him. His secret relationship results in lies to his friends and parishioners.  As he falls further, he admits to himself he’s made an idol of Poppy.  As for being neighborly, Poppy lives on the same block as the church which makes coveting the neighbor’s house somewhat ironic.

In the end, the question remains:  Do you make decisions based on what you want for someone else or what is needed for you. Sometimes there are things you must do or see before you get to where you need to be.  It’s a definite MUST READ AND JOURNEY!

Until she came. Then I learned new rules.

My name is Tyler Anselm Bell. I’m twenty-nine years old. Six months ago, I broke my vow of celibacy on the altar of my own church, and God help me, I would do it again.

I am a priest and this is my confession.

***Priest is a full-length standalone with an HEA. For Mature Audiences Only***

And the story continues with MIDNIGHT MASS. Spend Christmas Eve with Father Bell  and Poppy! 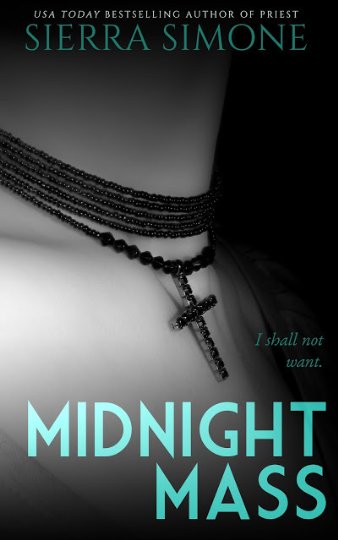